Howdy Everyone and their Mothers,

A quick read on my week. I also realize there are 6 in my top 5. So you can decide which one doesn’t count. Maybe leave a comment with your explanation of why it doesn’t count? 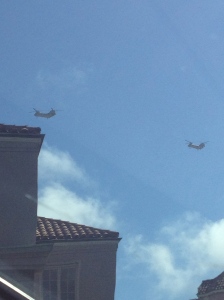 1) UFOs!!! Holy Cow, but seriously, there have been a lot of these military helicopters flying around SF lately. Ariel is convinced they were there because a race was happening. I am convinced this counts as Spies are Real instance # 222. What’s your thought? Leave a comment and let me know. 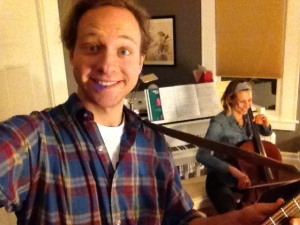 2) Rehearsal for Pianofight’s Variety Show Death Match with the Netheryonder String Quartet. There are only two of us, but if you dig string theory, then it’s mathematically correct. If you disagree, we could argue back and forth on the comment board. I am pretty weird to argue with though cause sometimes facts aren’t important to me. Thanks Cigdem! But seriously, try telling me I’m not made of vibrating little strings and I will tell you I’ll be made of light instead. 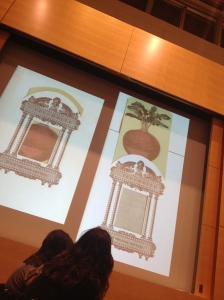 3) Ariel got into Mills College for Book Arts and Creative Writing. She chose Poetry as her writing emphasis. Hooray Ariel! Photo is from sharing time with faculty last night, where we met a ton of interesting people and I was in the same room with the most writers as I ever have been. That sentence sounds wrong. Don’t you judge me, writers who i was have been in the same room with being. Or do, and leave a comment with how that can be made English. 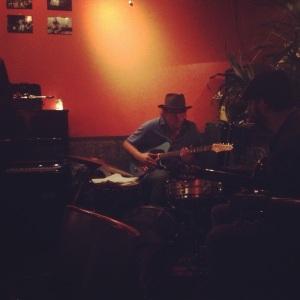 3) Dave Mihaly’s Shimmering Leaves Orchestra at the Revolution Cafe in the Mission last night. Dave Mihaly is a genius and friend. Press play & music will play. Leave a comment and I’ll share it with Dave. 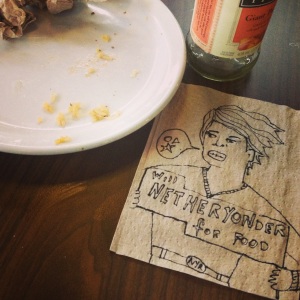 4) Sketch from dinner at Mills College. Was thinking of making a sign like this for when I got hungry again. The napkin is all crinkled up now but if you want to buy it, lmk. Price is totally negotiable. If you think it sounds crazy to buy a napkin drawing from me, don’t worry, I’m just kidding. If you are contemplating buying it, I am seriously thinking it could be a solid investment… just sayin. One of One! Original!!! Excitement! Humor! 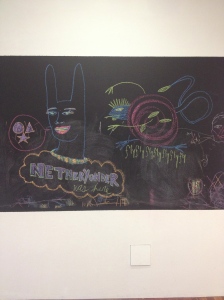 5) Had a play date with aforementioned Mr. Dave Mihaly Friday morning. We went to the De Young Museum and had coffee and drew on a chalkboard they had on display, then enjoyed making some music and talking together back at his place over scrambled eggs and kale and water colors he made while on a trip through Asia. We just looked at the watercolors, but ate the kale and eggs. He also gave me a copy of the I Ching, which I know nothing about, but am about to find out about by reading some of the I Ching. Maybe I’ll share something about it later. As long as my famous shoulder doesn’t get in the way.